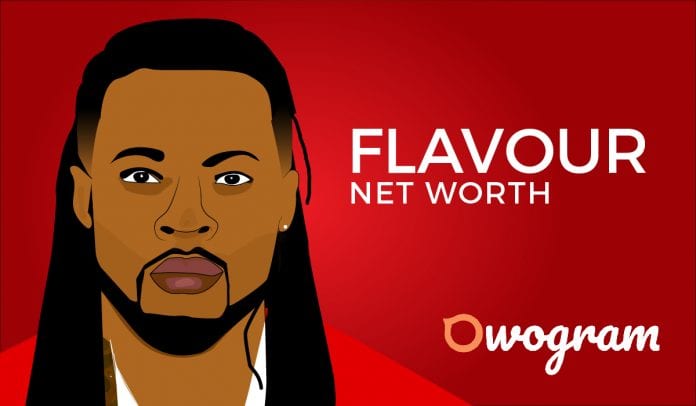 What is Flavour net worth?

Flavour is a versatile instrumentalist, capable of playing drums, piano and guitar. He gleaned these skills professionally while in music school.

He was a professional drummer before venturing into singing, playing for City Centre Enugu. Through his knowledge of music, he was able to learn music production effortlessly.

He is a high-life singer known for singing in his native language “Igbo” and the English language. He has won several awards for his uniqueness and originality.

He is prominent for focusing on love songs, most especially the kind that describes women, their endowments and all the feminine essence.

Quite versatile in his acts that he once took a break from his usual Igbo hip-pop, cultural and romantic songs to delve into motivational tracks that had inspired people.

He has also shown another angle of his abilities which were not limited to waist twisting and praising the behind of women.

Flavour Net Worth and Highlights

As of 2020, Flavour net worth is estimated to be roughly $25 Million dollars, making him one of the 10 richest Nigerian musicians.

He hails from Umunze in orumba South LGA, Anambra State, Nigeria. Though he was born and bred in Enugu, he stayed there from cradle to adolescence before moving to Lagos.

Flavour is the first son of a large family of four siblings and seven step-siblings.

Though, his family wasn’t very fond of his musical ambitions; they often dismissed it as a pipe dream.

His mother, in particular, believed that his musical ambitions wouldn’t amount to anything.

After which he proceeded to Uwkunanaw boys Secondary School in Achara Layout, Enugu, Nigeria and obtained his West African Senior School Certificate.

He has a daughter with his baby mama, Sandra okagbue and the child’s name is Gabrielle.

Flavour also has another daughter with one of his baby mama, who is a Nollywood actress and ex-beauty queen, Anna Ebiere Banner, and the child’s name is Sophia.

Flavour began his music career at the age of 13 when he started playing the drums for his church choir in Enugu.

The resident pastor at his church introduced him to a friend, Chris I Ordor, the CEO of SoundCity Communications.

Mr. Ordor had just started a musical company aimed at training young musicians on the basics of music and nurturing them all the way to a professional level.

In 1996, Flavour was invited to join the company on an educational scholarship to study music.

In 1999, Flavour moved on from playing the drums and started playing the keyboard. He also used to provide backing vocals for other musicians at SoundCity.

At the age of 19, Flavour emerged unto Nigeria’s musical scene as a drummer and pianist for a local Enugu band.

After learning to play drums professionally, Flavour received an offer to perform at City Centre, Enugu.

The massive crowd at City Centre inspired him to gain new grounds and reach great heights.

In 2005, his debut album N’abania came to live through Obaino Music. The album recorded a success but did not see the light out of the locality of Enugu.

Related: What is Wande Coal net worth?

Flavour collaborated with an indigenous rapper, on the album’s lead single of N’abania.

The song was recorded at Kingsley Ogoro’s studio in Lagos, Nigeria and won the award for Best Collaboration at the Headies Awards.

He became known as Flavour N’abania with the album title forming part of his stage name.

The second album succeeded the first with the title “Uplifted” in 2010 which includes single like “Adamma” and “Nwa baby” and his expectations for the album became a reality when a South African imprint released the album.

This time it was not just limited to the confines of Enugu but South Africans felt the impact.

On the 18th of October, 2012, he released his third album “blessed” as the name implies was really a blessing to his career.

It is his most successful album to date due to the number of producers that worked on it, launched the same day with the opening of his nite club “2nite Entertainment” at Toscana hotel in New Haven, Enugu, Nigeria.

In December 2014, Flavour released his fourth studio album “Thankful” which has 22 tracks. The album has hits singles like “Wakeup Call”, “Wiser”, “Golibe” and “Ololufe” featuring Chidinma.

Related: How much is Chidinma net worth?

“Ijele – The Traveller” is the latest album released in 2017. It contains 17 tracks – including a track featuring a blind Sierra Leonean fan.

He has won so many endorsement deals from lots of companies, some of which are GLO, MTN, Nigerian Breweries, Flat Tummy Tea Brand, Onga Seasoning.

This endorsement deals worth millions of naira which is surely going to have a great effect on Flavour net worth.

Flavour net worth cannot be over-emphasized as he has lots of exotic cars and luxurious houses.

He said in an interview that he bought a house for his mother long ago. According to reports, he also has a multi-million mansion in Lekki, Lagos State.

The house is really a luxurious one, with multiple rooms and a pool where he hangs out with his friends.

It also has a garage for Flavour’s multiple cars. It has a gorgeous interior made in a jazz bar style, with paintings on the walls.

The house has everything needed for a romantic date where he often invites his girlfriends to. It reportedly has a recording studio; also, the singer has a few guard dogs.

Talking about Flavour N’abania’s cars, he is known to have multimillion naira worth of vehicles.

Some of his known assets are black Mercedes Benz G-wagon, which costs over N40 million, as well as the Land Rover Automobile (N25 million), and 2012 BMW X6 (N18 million).

It goes without saying that Flavour has a record label called 2nitemusicgroup. Clearly, Flavour net worth has contributed to enjoying his luxurious lifestyle.

In one of Flavour N’nabania quotes, he said; “Creativity is not a gift; it is a mindset that you practice”. – Flavour

Here are quick Faqs about Flavour N’nabania below:

What is the networth of Flavour?

Chinedu Okoli known on stage as Flavour N’abania net worth is estimated at $25 Million dollars.

Though it’s not the first time, Flavour and Chidinma have been rumoured to be in a romantic relationship since the duo released an RnB single, ‘Ololufe’. Their bond in the music video portrayed that of lovebirds, hence sparking dating rumours

Who is Flavour wife?

No confirmation yet on Flavour’s wife.

Who is Flavour’s father?

Benjamin Onyemaechi Okoli is his father. Flavour is the first son of his father and has three sisters with a younger brother, DJ Derekz, real name Okoli Chidera Emmanuel.

Here are some life lessons from Flavour

“The secret of my success is simply originality. Right from when I joined the industry I was determined to distinguish myself by my originality.

He said “I knew it was going to take some time and that I would have some hurdles to cross but I decided to stick to my originality all the way”.

“When I travel to some African countries for shows and the stadiums are filled up and fans cry and faint when I perform. It humbles me that anyone could rise to become somebody”.

“I go so deep when I compose my songs.”

I am never in a hurry when composing my songs. The problem with musicians while composing beats is that they are always in a hurry.

A great artiste who desires quality beats must learn to be patient. If the words or lyrics do not touch me, I won’t release it.

I won’t drop a song until I get the right inspiration and have the right words”.

Having an Identity that people will recognize is just one of the 10 practicable life lessons from Flavour about hustle and success.

Concluding Notes on Flavour Net Worth

Flavour is well known for his ability to sing fluently in the Igbo language. He sings mostly in Igbo, English, and Pidgin.

He is referred to as an indigenous singer whose aim is to promote the cultural value of Igbo land through music.

With all the discouragement and dismissal from his family, he came out even stronger. His net worth is indeed one that is mind-blowing.

What do you think about Flavour’s worth? Leave a comment below.