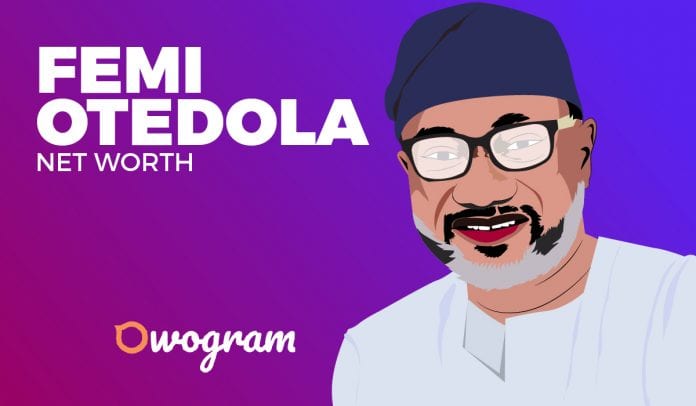 How much is Femi Otedola net worth?

Femi Otedola is arguably one of the prominent, and well-respected individuals in Nigeria today due to the giant strides to industrialization and wealth creation which he has affected in different industrial sectors in Nigeria.

While Femi Otedola Net Worth is the major reason why most people talk about him as a person, and what he has been able to achieve as an individual makes him such an exceptional figure in the Nigerian community.

Femi Otedola is a rich entrepreneur, industrialist, and investor who has consistently been at the forefront of the industrial sector for over 3 decades.

Today, Femi Otedola is on the list of the top 10 richest men in Nigeria and he has made wonderful contributions to the progress of the Nigerian economy through a vast number of companies in his name.

Femi Otedola Net Worth is just the natural consequence of the huge contributions which he has added to the Nigerian economy over the years.

Through this article, we will explore everything to know about Femi Otedola’s biography, business career, and his achievements.

Today, based on Forbes Figures, Femi Otedola is worth approximately $1.8 Billion dollars. Here are some of his career highlights:

Femi Otedola was born on the 4th November 1962 to the family of the former governor of Lagos State, Sir Michael Otedola.

Despite being born and raised in Ibadan, Oyo state, Femi Otedola is a native of Lagos state where his father once served as Governor.

Few details are available of Femi’s childhood, given the fact that he is not an individual to give media appearances on a frequent basis.

He is the father of 4 children, including DJ Cuppy, one of Nigeria’s most prominent DJs, although, not on the list of the top ten richest musicians in Nigeria.

After the conclusion of his tertiary education, Femi immediately put his brain and skills to work. This allowed him discover the hidden lucrative potential of fuel retail market back in the summer of 2003.

He then swiftly moved to get the funds to invest in this business by establishing Zenon petroleum and Gas limited. This company majorly deals in the marketing of crude products like Gasoline, diesel, Kerosene, and LPG.

In no time, Femi Otedola Net Worth inevitably got a significant boost which allowed him to invest a staggering N15 billion in downstream infrastructure development in the following year.

This allowed Femi to secure a storage depot located in Apapa, equipped with four cargo vessels which had a volume capacity of 147,000 metric tons.

Later that year, he also secured a huge assembly of up to 100 DAF trucks worth up to N1.5 billion. These series of acquisition outlined the extraordinary profit which Femi made in the downstream sector just one year in.

By the end of the following year, Zenon had become a huge player in the Nigerian diesel market and downstream sector overall.

He secured contracts to supply fuel to huge corporations in Nigeria, including the likes of Dangote group, Coca-Cola, Cadbury, MTN, Nigerian breweries, Nestle, Guinness and so on.

You would agree that these were major players in the Nigerian commercial industry, and these moves would bring lots of capital gains for his business.

In March 2007, it was announced that ten banks had approved a syndicated loan of US$1.5 billion (N193.5 billion) to Zenon as working capital to build the largest premium motor spirit storage facility in Africa.

Within the same year, Zenon bought a 29% stake into the largest fuel marketing company in Nigeria; African Petroleum. Most of the loans acquired turned to a series of investments for Femi.

Some of these investments include Zenith bank, and United Bank for Africa (UBA). In addition to his investment in diesel, Zenon also foraged into Kerosene marketing.

After his huge investment into the company, Femi was appointed chairman and chief executive of Africa Petroleum as he acquired the biggest stake in the company.

Later that year, he acquired an additional 29% stake of the company worth over N40 billion. In total, Otedola had a stake of more than 55% in the African petroleum limited. Wouldn’t you agree that this achievement would have had a huge impact on Femi Otedola net worth?

Two years after acquiring a controlling stake in African petroleum, Femi Otedola Net Worth skyrocketed so much that he became the second Nigerian to make an appearance on Forbes list of billionaires, behind Dangote.

In 2009, the company decided to perform an upgrade on the LPG storage terminals across Lagos, kano, and Port Harcourt. However, the drop in oil prices in that year meant that the business would suffer record losses in the end.

In a bid to revive the company, African petroleum was rebranded and it was renamed to Forte Oil Plc. The rebranding process involved business restructuring, employing more tech-related solutions, as well as corporate governance. Within two years, the company returned to profit, outlining effective changes in the company.

Zenon became embroiled in controversy back in 2012 when it was reported that it was among a few companies which were involved in fuel subsidy scams.

Going by the report, it would mean that Zenon owed the federal government up to $1.4 million. Videotapes also leaked which showed Femi Otedola offering to bribe Farouk Lawan with a total sum of $500,000 which will be paid in six installments in order for the Nigerian legislator to remove the company’s name from such a blacklist. This terribly affected Otedola’s figure and outlook within the business space.

Following the successful diversification and return to profit of Forte oil, the share price of the company boomed at a staggering 1,321%. This allowed the company reap profits reaching a massive $25.7 million before tax, which is double the profit earned the year before.

How Femi Otedola spends His Money

For a billionaire with Femi Otedola net worth, living a luxury life is not so expensive. He owns a mansion worth over $10 million in Ikoyi Lagos State.

He also has residences across the country, most importantly in locations of his business of which are Abuja, Port Harcourt, Enugu,, as well as Kano state.

Additionally, he owns mansions outside of the country in London, New York, Dubai, and Monaco as revealed by his daughter, DJ Cuppy.

Everyone would agree that Femi Otedola is not much of an outdoor person, he has good taste in luxury. He posses a fleet of luxury cars which is fitting for a man of his status.

These include a Range Rover, a Mercedes-Benz AMG G63, a G-Wagon, a Mercedes SLR McLaren,  a Rolls-Royce Phantom; all of which are worth up to $2 million.

He also flexed his financial muscle when he purchased exotic cars (Ferrari) for both his daughters Temi Otedola and DJ Cuppy.

In one of our favorite Femi Otedola quotes, he once said; “I grew up in poverty, but I always saw it as a challenge. The good thing is that you can surmount a challenge if you are willing to pay the price. The price is hard work.”

His life’s achievement, growth of his businesses is proof of what he said. Work hard, the luck will smile at you.

Summary of Femi Otedola Net Worth

Femi has been able to express his expertise on business decisions and investment, especially through the oil and gas sector. This brought him exponential profits, simultaneously adding to his wealth pool.

Femi Otedola Net Worth in excess of $1.8 billion is thanks to the innovative mind and business strategy which he has exploited over the years in the business industry.

What did you think? Let’s have your comments in the box provided below. Also, don’t forget to share this article!