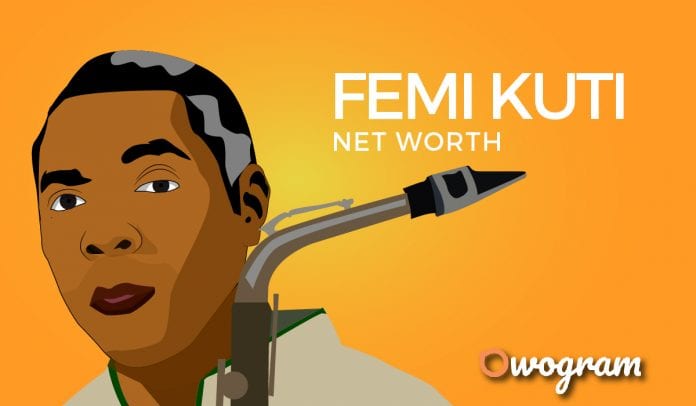 How much is Femi Kuti net worth?

Femi Kuti net worth is definitely a topic of interest to many Nigerians, especially for the older population.

This is not surprising as he is the son of the popular and legendary Afrobeat singer and political activist Fela Kuti. Femi became what he is today, thanks to his father for the most part of it as his father’s will, zeal for music, and activism were all passed down to him.

And he gladly embraced all of it. His musical talent was there for everyone to see and that is why he started out at the tender age of sixteen when he started playing the keyboard and saxophone, thereby becoming a part of his father’s band.

Femi carried on the torch of his father Fela even after his death through Songwriting and singing in a style identical to his Father’s. Although Femi is not listed as one of the richest Nigerian singers, his net worth is a topic of interest.

He is also very inclined to politics both in Nigeria and Africa at large, his songs are actually a reference to this fact. His songs are full of energy, funk, jazz songs that discuss politics, corruption, poverty, and the harsh living conditions Nigerians are subjected to every single day.

Enough of the whole introduction and let’s get to the business of this article which will discuss Femi Kuti net worth.

As of today, Femi Kuti is worth an estimated $1.5 million. Here are some of his best career highlights:

We’d like to give you a brief story of his life and music career.

Femi Anikulapo Kuti was born overseas, in London to be precise to none other than the legendary Fela and Remilekun (Remi) Ransome-Kuti, and was raised in the former Nigerian capital, Lagos.

Shortly after his birth, Femi’s mother left Fela probably as a result of his well-pronounced promiscuity at home and abroad.

However, In 1977 as fate would like it, Femi decided and returned to his father. Femi started playing the saxophone at the age of 15 which is exceptional and eventually became a member of his father’s band. Who knew what Femi Kuti’s worth would turn out to be?

You can tell how good he is for him to join a band of that high class aged 15. He studied at Baptist Academy and Igbobi College.

Related: What is MR P Peter Okoye net worth

Like his father, Femi has made duties to social and political causes all through his career.

He made his own band Positive Force in the late 1980s with Dele Sosimi (Gbedu Resurrection), previous keyboard player of Fela Anikulapo Kuti.

His international career started in 1988 when he was welcomed by the French Cultural Center in Lagos and Christian Mousset to perform at the Festival d’Angoulême (France), the New Morning Club in Paris, and the Moers Festival in Germany.

In 2001, Femi teamed up on his album Fight to Win with various US musicians, including Common, Mos Def, and Jaguar Wright.

Additionally, in 2002, Femi contributed a revamp of his father’s classic song “Water No Get Enemy” to Red Hot and Riot, a compilation CD in tribute to Fela Kuti that was released by the Red Hot Organization and MCA.

Femi Kuti net worth had started to grow as his track was made as a team with hip-hop and R&B artists D’Angelo, Macy Gray, The Soultronics, Nile Rodgers, and Roy Hargrove, and all returns from the CD were given to charities committed to raising AIDS mindfulness or fighting the disease.

Femi Kuti’s voice is highlighted in the videogame Grand Theft Auto IV, where he is the host of radio station IF 99 (International Funk 99, portrayed as “playing an extraordinary selection of classics from West Africa, the US and elsewhere”).

In comparable style as his father, there have been grumblings of Kuti’s analysis of his country Nigeria, explicitly in the song “Sorry”, alongside “What Will Tomorrow Bring” and “97”.

Femi Kuti’s album Africa for Africa stressed “Bad Government” as an issue in Africa. Prior to the 2011 elections in Nigeria, he connected with the Nigerian citizens that there was “no distinction between the three candidates challenging for the presidential seat in Nigeria”.

He added, “we could say we’re moving in the democratic process. And it’s probably better than going to war, but corruption is still very rampant. The people are hungry and sick. And the government controls the media, so it can’t be critical”.

In one of our favorite Femi Kuti quotes, he also said: “It’s a very hypocritical situation. People settle for putting a meal on the table, but they don’t know that the rest of the world doesn’t suffer every day from power outages and water shortage. Nigerians don’t even know about the history of African slavery, because it’s not included in the text books.”

He reverberated similar conclusions in the 2015 elections by releasing a remix to the song “Legislative issues Na Big Business” highlighting Tuface Idiibia and Sound Sultan through his management organization, Chocolate City.

Kuti’s song “Make We Remember” approaches individuals to remember the expressions of his father and “great black individuals”, who battled for the liberation of Africa. For an exceptionally prolonged stretch of time, Femi has been using music to rouse, change and persuade African individuals.

Femi was born into a famous family. Just like his father, Femi forged a career path different to others. Even with music, his style was visibly different.

He followed in the footsteps of his father by carrying on the Afrobeat created by his father, a new genre of music that fused Jazz, Funk, West African High Life and psychedelic rock. And it was indeed a bang.

Femi has turned out to be one of the most vocal musicians and social commentators Africa has ever seen, this is a trait he obviously got from his father who Even in the face of the brutal military dictatorship that ruled Nigeria in the 1970s and 80s, Fela was one of the fiercest critics of a government that was notorious for intimidating and taking out its opponents.

Femi was a creative and versatile musician. He was multi talented in several instruments including the saxophone, keyboards, trumpet.

We can let this ability also translate into our lives especially in the business aspect. This creates all kinds of opportunities for us and gives us more chances to succeed.

Summary of Femi Kuti Net Worth

Femi Kuti today is definitely one of the iconic African musicians. Evident through Femi Kuti’s net worth as highlighted in this article, we can say that Femi Kuti is a model for positive change in our poor, corrupted society.

Though Femi might be at the tail end of his career considering his age, his music career has definitely left a legacy for Nigerians and also upcoming artists in the music industry.

So far, he has had an exceptional career. His exploits in the music industry cannot be matched and just like his father, we will never see anyone else like him.