Home The Watch Expect the Unexpected From McGregor vs Poirier 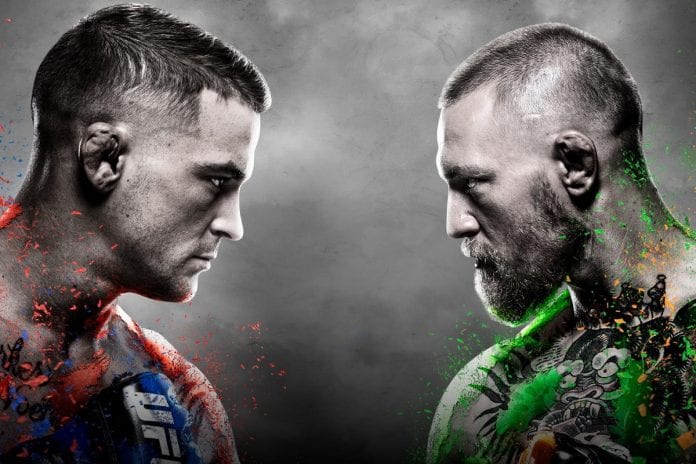 There’s nothing quite like a fight night topped by Conor McGregor, but UFC 264 is something even rarer; an event where the Irishman could well be fighting for his career at the top.

On July 10 he will meet old foe Dustin Poirier at the T-Mobile Arena in Las Vegas.

The two men have fought each other twice before; McGregor stopped Poirier inside a round back in 2014 before the American gained revenge in two rounds in January of this year. Now, they will fight to decide their rivalry but also to determine who will challenge UFC lightweight champion, Charles Oliveira.

After defeating Conor at the start of the year, Poirier had the option to fight for the lightweight belt vacated by Khabib Nurmagomedov.

Instead, he opted for the more lucrative trilogy fight with McGregor, seemingly with the confidence that he would win again and still get a title shot at the end of it.

According to UFC 264 odds offered by outlets like DraftKings, Poirier-McGregor 3 is a 50-50 contest. While the Irishman enjoyed life as the favorite for their previous two meetings, this time around it is a lot harder to pick a winner.

Back in January, McGregor tried what many thought he would; he torpedoed left hands at Poirier right from the outset, seemingly hellbent on once again ending things in the first stanza.

He wasn’t without success, tagging Dustin with solid strikes at several points in the round. However, ‘the Diamond’ endured and adapted, introducing a weapon that Conor had no answer for; leg kicks.

McGregor’s static stance made his lead leg an easy target for Poirier, and Dustin made short work of compromising it to the point where the Irishman could barely put weight on it. Once this opening appeared, Poirier bludgeoned McGregor with brutal punches to force the referee’s intervention.

It was a stunning moment and arguably the crowning achievement of Poirier’s career to date, eclipsing his 2019 decision win over Max Holloway for the interim UFC lightweight title. This all sets up a tantalising third fight between him and McGregor.

First off, we can expect an electric atmosphere inside the T-Mobile Arena. It will be the first time a full-capacity crowd is allowed at a McGregor fight since his quick win over Donald Cerrone in January 2020. The fight with Poirier in January took place behind closed doors on ‘Fight Island’ in Abu Dhabi.

As the biggest name in combat sports at the moment, McGregor always commands an enormous and vociferous crowd, something that he draws upon. Whether this will buoy him in the fight remains to be seen, but it’s an interesting wrinkle to consider.

It also seems clear that, much like their first two fights, this contest will predominantly take place on the feet. Both McGregor and Poirier are at their best when striking and this was the plain on which they’ve always fought each other.

It seems unlikely that either man will attempt to bring much of this third fight to the mat, though Poirier – with a more accomplished jiu-jitsu background – could be considering that as an option in order to tire McGregor out.

Given that he won so convincingly last time out, Poirier probably won’t be looking to change too much, but instead just focus on ironing out his weaknesses and continuing to improve where he can. In January, he did well to withstand Conor’s early assaults before breaking his opponent down.

It is McGregor who will need to make changes. For one, he will surely be more prepared for leg kicks and have a plan for defending against them. He might also employ more patience in this fight.

Prior to their first meeting, McGregor got inside Poirier’s head and had him enraged by the time they were in the octagon. Dustin charged at him and McGregor was able to pick him off with lethal counter strikes.

In the rematch, Poirier was a lot more level-headed and it was Conor forcing the pace and, at times, overreaching. He will need to draw Dustin in with feints and movement this time around, in order to set up his most effective shots.

Then, there is the question of motivation. According to Forbes, McGregor is the highest-paid athlete on the planet and has accumulated an eye-watering amount of money. He certainly doesn’t need to fight anymore.

However, as Tyson Fury recently pointed out, this could be McGregor’s last chance to cement his legacy in the UFC. Another loss to Poirier would skewer his hopes of a title run and all but write him off at the top level.

Though he could still be involved in big fights, like the third meeting with Nate Diaz, his status as a great fighter would be damaged, if not entirely eradicated.

So, we could be seeing a highly motivated Conor McGregor entering the octagon for this third fight with Dustin Poirier.

What makes this bout so intriguing is that we know either man is capable of finishing the other, and they both have very important reasons to strive for victory. With a sold-out crowd in attendance, it’s set to be a huge night in Sin City.