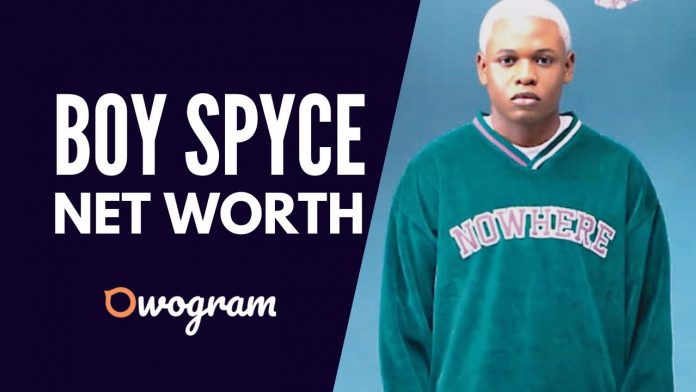 What is Boy Spyce Net worth today?

Boy Spyce is one of the biggest revelation of Marvin’s Records in Nigeria, and rightfully so, given how he stands out from the crowd of other upcoming Nigerian musicians who are making  waves in the entertainment industry in the twenty-first century.

After the release of his freestyle video for the song “Essence” featuring Tems by Wizkid, which went viral online, he emerged as a prominent figure in the Nigerian Afrobeat music scene. He is also a composer.

And soon after that, he was signed to one of the most successful record labels, Mavin Records, which is controlled by Don Jazzy.

He is a Nigerian singer and composer who hails from the state of Edo.

As he is not one of the top 10 richest musicians in Nigeria, the fact that Boy Spyce is regarded as  one of the best young music sensation currently, leaves fans wondering what is Boy Spyce Net worth.

In this article, we will cover everything about Boy Spyce net worth, achievements, Age and career.

Boy Spyce Net Worth and Highlights

Boy Spyce net worth is  yet to be known as he is just four months into his professional career as a music star having been signed by Mavin Records.

We will keep updating Boy Spyce net worth as it is disclosed.

His International Recognition And Awards

Having just burst unto the scene, Boy Spyce is yet to claim his international recognition and award but he has shown great signs of becoming future star.

As soon as we get a hand on his international awards, it will be updated.

Boy Spyce was born on May 10, 2001, in Edo State, Nigeria, into the family of Mr. and Mrs. Ugbekile. He spent his childhood in Isolo, a well-known neighborhood on the mainland portion of Lagos, and later made his home at Jakande Estate.

The gifted musician received his education at Lagos State Model College Kankon, which is located in Badagry.

Despite the fact that very little information regarding Boy Spyce’s educational history is now available, it has been reported that he is currently attending a postsecondary institution to study accounting.

As he was growing up, he was inspired by the popular Afrobeats and Hip-Hop sounds that were developed by Nigerian musicians.

This music got a lot of people in his community  attention, and they assured him of a better future through his music.

Along with all of this, he also got encouragement from his parents to keep pushing through for a better and brighter future. Boy Spyce released his first studio music single, “Weather For Two,” in August 2019.

Boy Spyce rose to fame after he made a music cover of Wizkid’s song “Essence,” which got a lot of people’s attention on all social media including the MAVIN RECORD Owner “Don Jazzy.”

This caused Don Jazzy to contact Him On Instagram To Sign Him To His Record Label. Boy Spyce rose to fame after he made a music cover of Wizkid’s song “Essence,” which got a lot of people’s

Boy Spyce began his professional career as a musician on April 15th, 2022, after signing a record deal with one of the biggest record label in Nigeria, Mavin Records.

His first EP, which was named “Boy Spyce,” was the project with which he made his official debut as a working musician in the music business.

The EP was produced and released by his newly signed record label.

Boy Spyce, who is famous for his freestyles and went viral for one of them, has continued to grow a substantial following since then.

Don Jazzy, a well-known music producer in Nigeria and the proprietor of the record label Mavin Records, made the announcement that Boy Spyce had been signed to Mavin Records on April 14, 2022.

Don Jazzy has said that he has been keeping a close eye on the young man since the year 2019.

Boy Spyce became a part of the formidable alumni network of prominent musicians who had previously recorded for the label.

How Boy Spyce Got Signed by Mavin Records Explained

When asked about his early career, the great singer and songwriter discussed how he had always had the feeling that he was going to be signed to a record company.

He said that he had believed he was going to get signed to a record label. He continued by saying that Don Jazzy had in fact sent him a note on a very memorable day, which was Christmas day, and that he had forwarded it to him.

Boy Spyce said that Don Jazzy’s statement had been posted on Instagram on December 25th, 2019, through a private message.

At first, Boy Spyce believed that the message had been posted by a parody account; however, when he investigated the account, he found that it had a verified tick next to its name.

Related: Skibii net worth and biography

What Tribe is Boy Spyce?

BoySpyce is a southern Nigerian who was born in the city of Benin, Edo state.

Does Boy Spyce have a girlfriend?

Our research suggests that Spyce, Mavin’s newest signee, is single at the present time. All of his attention has been on his music and his family.

How old is Boy Spyce?

What is boy Spyce real name?

On a concluding note, this post will be updated as Boy Spyce go on to do great things in the music industry.