Home Net Worth Who Is the Biggest Artiste In Nigeria Today? Stats & Facts! 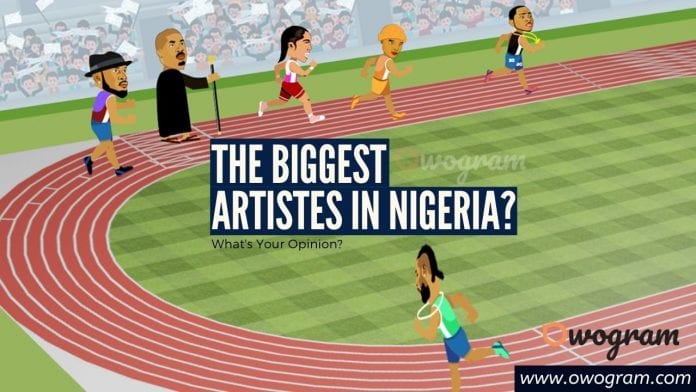 There have been a number of talented Nigerian music artists who have taken the Nigerian music industry by storm for several years now; however, only three have really captured the attention of fans both locally and internationally.

The massive amount of views, streams, awards, and other accolades amassed by these three artists, Davido, Wizkid, and Burna Boy, has prompted the question of who is the most successful musician in Nigeria.

Interestingly, each of these artistes have made it to the list of the top 10 richest musicians in Nigeria, and they’re not getting off that list any time soon.

In this article, we are going to take a look at their stats and facts which will help us arrive at a conclusion regarding who is the biggest artist in Nigeria?.

Who is The Biggest Artiste, Davido, Wizkid or Burna Boy?

I am sure that you must have been deeply involved in this type of argument at some point.

No doubt, many have been debating over and over again on Wizkid, Davido, or Burna Boy concerning who is the biggest Artiste.

The reason for this is that these arguments are not backed by facts and stats, favoritism, error in assessment, etc. It is an incontrovertible truth that fans allow their emotions to take control, not allowing them to give the right answer to the question who is the biggest artiste in Nigeria?.

This article is however impartial and prepared solely based on official figures, facts or estimates and information from reliable sources we can all trust.

So, we will answer your questions in the subsequent subtopics as we break down all the factors that will help us get the answers to the big question here.

We are going to consider the number of awards, number of online music streams of the albums Burna Boy has released in his career;

Since his rise to prominence in the music industry, Burna boy has scooped a good number of awards as he has also been nominated for many awards.

The one that really caught the attention of Africa as a whole was when he was among the nominees in the highest award in the music industry, the Grammy Awards in 2020, and finally winning it in 2021.

Among other awards are;

On Spotify, burna boy has a total of 14.1million listeners, making him the first African artiste to record such a number.

The album, “twice as tall” has topped the apple music charts in 22 countries including the United Kingdom.

After its release in August, “twice as tall” album hit a massive 50 million streams on audiomack after a month.

The album had 7million streams on YouTube at the time of its release.

In three months, the album has had 89 million streams on audio mack.

Check out this quick list of the top 10 Nigerian music websites to download the latest songs of Burna Boy and other musicians.

One of Africa’s most talented artiste, Wizkid has released several albums which have earned him a lot of awards and nominations as we are going to consider below;

Many have asked the question; “Davido and wizkid who is the richest?”, Which of the two is the most popular, Which of them is the best, and more. You may need to read the post.

After Burna Boy released his “twice as tall” studio album, Wizkid didn’t waste time in dropping his “Made In Lagos” studio album which also caught the attention of music fans.

We’ll discuss the number of streams and views on all platforms so as to help us arrive at the answer to the big question who is the biggest artiste in Nigeria?.

Wizkid’s new album “made in Lagos” has risen to become the third most streamed album on Spotify with 10.1 million streams just a few weeks after its release on October 30th.

Two weeks after its release, the album has had 42 million streams on audiomack.

Wizkid’s “made in Lagos” breaks the world record as it has recorded over 100 million streams on different streams platforms with YouTube Apple music and boom play inclusive, just nine days after its release.

Davido has stole the show with is mind blowing “better times” studio album which features several top foreign artistes like Nicki Minaj, Young thug, Chris brown and many more after its release on November 13,2020.

On U. S iTunes, “better times” had already clocked a ground-shaking 100 million views just three days after its release. Beating Burna boy’s “twice as tall” and Wizkid’s “made in Lagos.

In less than a week (five days after its release) the album has had a total of 46 million streams, put simply, it took only five days for “better times” to record 46 million streams on audiomack while it took “twice as tall” and “made in Lagos” more than two weeks to even get close.

Davido also has a total of 20 million-plus followers on Instagram as compared to Wizkid and Burna Boy.

Related: Top ten richest Nigerian actors and their net worth

Davido currently surpasses Wizkid and Burna Boy on international collaborations as he has recently featured Nicki Minaj, Young thug in his recent album.

This title was previously held by Wizkid among the three superstars but has surrendered it to Davido who has done more international collaboration than him.

Worldwide, Davido has the highest searched volume on Google as compared to Wizkid and Burna Boy. Interns of awards, the three superstars are nearly tied in the collection of awards.

Summary of The Biggest Artiste In Nigeria

Having looked at the stats and facts relating to these three African music giants, we can conclude by saying that Davido is currently the biggest artiste in Nigeria, it is hoped that he keeps the fire burning.

Still, we’d love to have your opinion. Use the comment box below, tell us what you think.