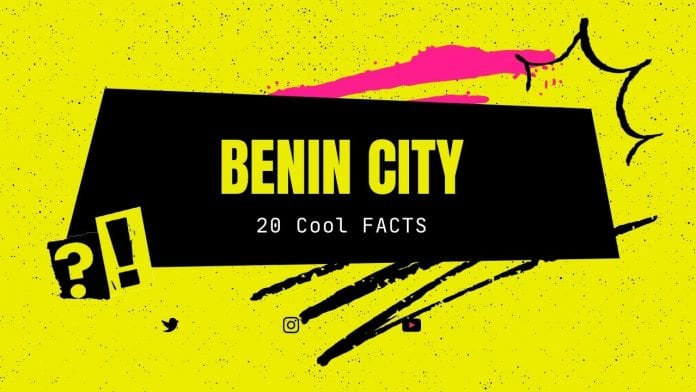 We bring to you 20 interesting facts about Benin City, the capital of Edo state in Nigeria.

Did you know that the region which Edo state covers comprise kingdoms and empires which were referred to as powerful sites in the ancient days?

Edo is a southern state in Nigeria and it is a diverse state which is inhabited by the Edoid peoples consisting of the Edos, Esans, and the Afemais.

Edo state is the 27th most populous state in Nigeria and according to the population census of 2006, it has a population of 3,233,366 people, and the capital of Edo state is Benin City.

20 Interesting Facts About The Capital of Edo State – Benin City

Benin was gotten from the word “Ubini”. The word “Ubini” was made by a Portuguese explorer which means “a place of heavenly pageantry and prosperity”.

It was estimated that the Great Wall of Benin took about 150 million hours to construct.

Related: 20 fun facts about Abeokuta – The capital of Ogun state

The first city in Nigeria to use sophisticated weapons like guns to fight in a war was the city of Benin during their Idah war.

The people of Benin are the best bronze casters in the world.

Traditionally, crowned prince mothers were usually killed before their sons ascend the traditional throne in Benin but Queen Idia became the first mother of Oba to see her son ascend the throne.

Benin was home to the first known embassy in Nigeria. That occurred in the 16th century during the reign of Oba Esigie.

Lagos (Eko) was founded by Oba Orhogbua of Benin.

Ghana’s Ga TRIBE USED TO BE FROM Benin But they migrated to Ghana during the reign of Oba Udagbedo.

The famous FESTAC 77 was made by the people of Benin and it represented the Queen Idia mask.

Benin was the first city in the world to have a semblance of street lighting.

In the 13th century, Oba Oguola dug massive walls which surrounded the city of Benin.

In the history of Benin, Ogiso Igodo and Oba Oranmiyan were the only kings that ascended the throne without a crown.

Until the late 19th century, all the Obas of Eko (Lagos) were usually buried in their local homes in Benin City.

Related: How to become a pilot in Nigeria

The city of Benin was a great empire before the British conquest.

The first king to be baptized in Africa was Oba Esigie of Benin.

Oba Esigie of Benin instructed Duarte Pires to write a letter to King John II in 1516AD and that was regarded as the oldest known letter written in Nigeria.

In West Africa, the first-ever recorded bank was built in Benin by Oba Eresoyen and the bank was called Owigho.

Benin City is known as the Center of Rubber Industry in Nigeria.

Are you from Edo state; Benin city to be precise? Tell us more facts by using the box provided below.