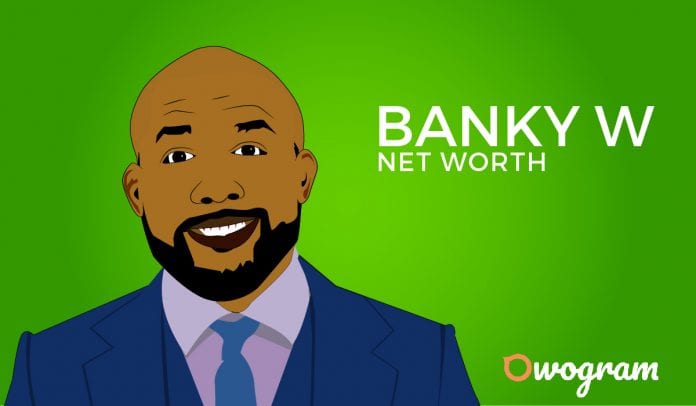 How much is Banky W net worth?

Olubankole Wellington whose stage name is Banky W is a Nigerian singer, actor, rapper and politician.

The Nigerian superstar is also a philanthropist and foodie.

He is also an entrepreneur, an accomplished artiste who built a music empire that produced internationally acclaimed artiste like Wizkid.

He comfortably occupies a prestigious space in the Nigerian music scene as he is widely considered one of the richest musicians in Nigeria.

He holds dual citizenship being a U.S citizen by birth and Nigerian descent.

Banky W is the founder of the “I am Capable” Scholarship fund which provides tuition, room, and board for indigent undergraduates who met the foundation’s requirement.

Below is the biography of Banky W.

Olubankole Wellington with stage “Banky W” aka “Mr Capable” was born on March 27, 1981, in the United States of America to Nigerian parents.

His father hails from Badagry while his mother is from Calabar in Cross River.

He has four siblings; a sister and three brothers. His sister is the co-founder of The Urban Marketplace (TUM) Showcases and Events.

At age 5, Banky W’s parents moved back to Nigeria where he would remain for the next 12 years, attending Corona Primary School, Home Science Association Secondary School, and Ajao Secondary School, all in Lagos, before finally going back to the US for college.

He studied Industrial Engineering from Rensselaer Polytechnic Institute in New York, the United States on scholarship.

Banky W, while in secondary school won the Albany Idol competition and this brought him to the fore in his music career.

He was in his junior year in RPI when he started writing, producing and hitting the studio in order to release something while in the United States of America.

At the age of 8 years, Banky W started his music career, when he was singing in his church choir.

His first love is music; he mostly sticks to his niche as an R&B artist. He started his record label E.M.E in 2002 while studying.

In 2009 he left the US for Nigeria and established his record label in Lagos where he signed artists like Niyola, Shaydee, Skales, and Wizkid to the label at the time.

His breakthrough debut studio album “Back in the Building” was released in 2006.

He wrote the first theme song of Etisalat Nigeria titled “0809ja for life”.

R&BW was released a day after Valentine of 2013.

He launched the album with a concert tagged the “The Grand Love Concert” at the Civic Centre, Ozumba Mbadiwen Victoria Island, Lagos.

There, he featured several other artistes including Iyanya, Waje, and many others.

Some of Banky W’s hit songs include “Made For You”, “Yes/No”, “Till My Dying Day”, “All I Want Is You” and “Ebute Metta” – which sampled Rihanna’s popular song “Umbrella”.

Adding to Banky W net worth is a man of many talents and has featured in MNet TV Shows such as Jacob’s Cross, MTV’s Shuga and some blockbuster Nigerian movies.

This led him into completing film making and screenwriting courses at New York Film Academy where he honed his acting and production skills.

Since then, he has produced and directed numerous music videos and TV adverts.

“The Wedding Party 2” is Nigeria’s highest-grossing film in history. The film earned more than N500 million at Nollywood’s box office.

This is sure going to have a high rise in Banky W net worth.

Banky W is also a politician. He made headlines in 2019 when he participated in Nigeria’s elections.

Despite the loss, Banky W managed to win two polling units in Eti-Osa.

He said he was proud of what he accomplished in just three months and vowed to come back stronger than ever in four years’ time.

“I hope we realize that winning some areas in Eti-Osa… is proof that we can do this anywhere”, he wrote on Instagram.

He is also an accomplished motivational speaker and MC as he has delivered inspiring and powerful speeches at high profile events.

He has also anchored some important events including the Gulder Ultimate Search Celebrity Show Launch, and others too numerous to mention.

Banky W as a philanthropist founded “I AM CAPABLE” scholarship fund, a platform he uses to give back to society.

The foundation provides tuition and other assistance to deserving youths in various tertiary institutions in and outside Nigeria.

He has played a major role in many charitable initiatives as he has partnered with the ink Oak Cancer Trust to sponsor the treatment of twenty-five cancer patients.

Banky W net worth will be miscalculated without talking about his endorsement deals.

He has worked with reputed brands such as Etisalat, Coca-Cola, Airtel, Microsoft, TomTom, MTN and many more. He is the brand ambassador of Samsung, Uber and Ciroc Vodka.

Banky W is a millionaire, but he is not interested in splashing out on a new car every year.

He revealed in July 2018 that he had been driving the same Range Rover Sport for seven years and he has promised himself at the time that he would not purchase a new one until he owned his first property.

Finally, he reportedly celebrated his 37th birthday in 2018 by buying himself a new house in Lekki, Nigeria.

The luxury duplex has a swimming pool with the initial of his surname engraved at the bottom.

An interesting fact about Banky W is that he is a skin cancer survivor. The multi-talented artiste underwent a successful operation in 2017 – 10 years after it surfaced for the first time.

Related: CDQ net worth and biography

Banky W Net Worth and Highlights

Banky W Net Worth is currently estimated at $9.7 Million

Here are great lessons to learn from Mr. Capable:

Think Assets and Not Liabilities

“The way my mind is set up…what good is owning a Rolls Royce, if I’m STILL PAYING RENT ON THE HOUSE I PARK IT IN?”

Cut your budget just to help people, even if it means depriving yourself of the fine things you can live without.

“While driving my very-old car the last few years, I’ve spent a lot of time giving to the people around me and giving back to the society to the best of my ability”.

Banky had been love-struck since 2015, started dating since 2016, and got engaged in February but we heard nothing, not even the “all-knowing” Linda Ikeji.

If it was someone else we probably would have heard about his crush all over the internet since 2015.

Do the cooking of your success recipe quietly, let the aroma make the noise. You know what, we’ve got more Life and Business lessons from Banky W that you’ll find really helpful.

Banky W’s worth is one that cannot be underestimated, as his wings are widely spread out for income from different angles.

Though he has made it to the list of the top 10 richest musicians in Nigeria, he also uses some of his earnings to fund his charity, “I am Capable”.

Amazingly, his worth will never stop increasing as the year goes by because he never stops making wins.

What do you think about Banky W’s worth? Leave a comment below.