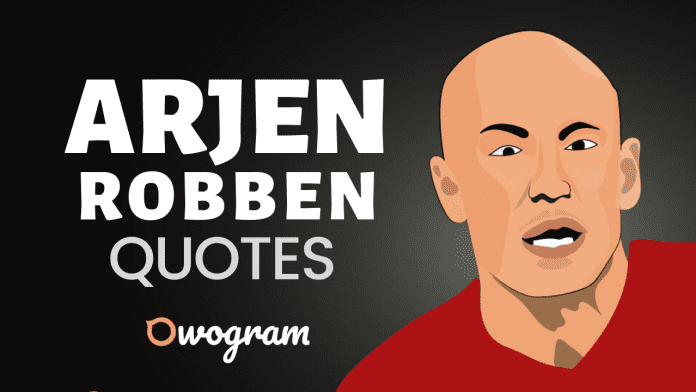 We bring to you a collection of 40 powerful Arjen Robben Quotes that will help you build a strong mindset.

Arjen Robben is one of the most successful and best modern-day footballers. He is an attacking player and typically plays as a right or left-sided winger.

Also, he has played for some of the best European clubs during his career. You can learn more about Arjen Robben’s net worth and Biography for more details about his early life and career.

In this article, we bring to you 40 remarkable quotes from Arjen Robben about football, life, productivity, and success.

40 Arjen Robben Quotes That Will Inspire You

2. “There’s always so much to improve, no matter your age”. – Arjen Robben

3. “The best thing about football and sport, in general, is that if you suffer a big disappointment, then there is no better feeling than coming back the following year doing well”. – Arjen Robben

4. “The best and most important step of my career was when I moved here – and Louis van Gaal brought me from Madrid to Bayern. It was the best move in my career, and it’s thanks to him”. – Arjen Robben

5. “I’m not a player who will just sit and pick up my wages if I am not playing”. – Arjen Robben

6. “Even during a sprint, I can occasionally still accelerate. I am so fit that I can accelerate during acceleration, like making a new start”. – Arjen Robben

7. “I have always said that I do not want to play in the Europa League”. – Arjen Robben

Related: 30 quotes from Francesco Totti about life and Football

8. “The most important thing for me is to feel that young players want to learn on the training pitch. If they spend 10 hours sitting around playing PlayStation, that’s their business”. – Arjen Robben

9. “You always have your favorite opponent and there always has to be negative one”. – Arjen Robben

10. “The older you get, the better you get to know your body”. – This is one of the Arjen Robben quotes I seriously can resonate with.

11. “You need to be very critical of yourself. There are a few very good managers who can make players better individually. Most managers think about the team process – and so you have to improve things one your own”. – Arjen Robben

12. “Forwards do a lot of things intuitively”. – Arjen Robben

13. “There are many examples of fouls and you need to have a kind of sixth sense in order to see what’s coming. You have to try to protect yourself but it’s not always possible”. – Arjen Robben

14. “If I ever spat at an opponent, I’d never be able to show my face to my family ever again”. – Arjen Robben

Related: 55 Remarkable quotes from Sadio Mane about football and life

15. “I want to try having fun as long as I can and play football at a high level. I do not know how long that will go on”. – Arjen Robben

16. “Players come and go, and that goes for coaches as well”. – Arjen Robben

18. “I’m always a realist, and I know the world of football is fast-moving”. – Arjen Robben

19. “A back heel is good if it works, not if it disrespects the opponent”. – Arjen Robben

20. “It is important that sometimes there are clashes between team-mates. We need each other to tell the truth, and this is not always a positive one”. – Arjen Robben

21. “We have to respect the opponents”. – Arjen Robben

23. “I have lots of energy, but that doesn’t happen like magic. I put in many extra hours in the gym and with the physios.” – Arjen Robben

26. “If you want to achieve something and have results and win competitions at a high level, you have to defend as a team”. – Arjen Robben

Just like one of the inspiring quotes from Christopher Samba, he said: “If we win games, I don’t care how we play. I don’t think there is a way to win, as long as you win”

28. “I’m a very explosive player and need everything to be right. I started working with an osteopath the last year I was in Madrid and have stayed with him”. – Arjen Robben

29. “Lionel Messi is in a different world. He is the best player in world football, without any doubt”. – Arjen Robben

30. “A break in the middle of the season is good for everybody”. – Arjen Robben

31. “If you never pass or dribble or go on the outside, cutting inside will stop working”. – Arjen Robben

32. “I always want to play. It is important to gain match rhythm”. – Arjen Robben

33. “The kind of money English clubs have available to spend is unbelievable. They buy everything they can”. – Arjen Robben

34. “As a team, you always need to show something extra in the Champions League”. – Arjen Robben

35. “If you’re at school, children who play football, you give everything to win… if you don’t succeed, that’s a huge disappointment. Then it’s okay to be sad, but better times are coming”. – Arjen Robben

36. “Attackers have to be selfish on the pitch occasionally, but it’s important not to exaggerate.” – Arjen Robben

37. “Only being able to watch is the hardest thing for any footballer”. – Arjen Robben

38. “You have to surprise opponents, keep them guessing. Doing the same thing over and over again without variation will not work”. – Arjen Robben

39. “Playing United is the sort of thing that really gets the best out of me”. – Arjen Robben

40. “I’ve achieved everything in my career that I set out to – with the Champions League as the crowning glory”. – Arjen Robben

Thanks for checking out this collection of Arjen Robben quotes! Don’t forget to share them on social media.