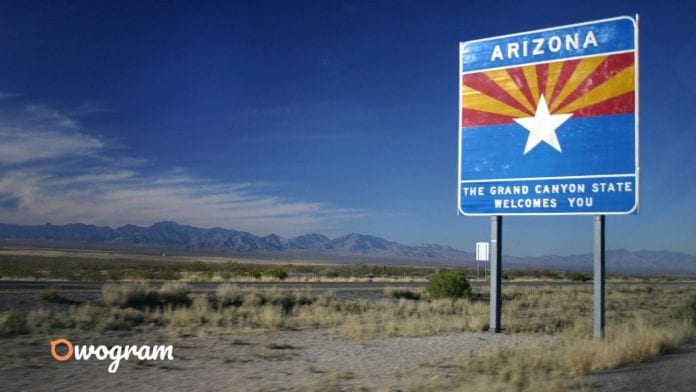 Arizona state is the sixth largest state in the U.S. Out of the 50 States that joined the United States Union, Arizona State was the 48th to join and that was on February 14, 1912.

Arizona is located in the Southwestern region of the United States and it is classified as the last of the 48 conterminous States in the U.S.A.

Arizona State is one of the notable 50 US states in alphabetical order.

Arizona is known for the production of Copper and it is even popularly referred to as the Copper State. Arizona has other nicknames too and such nicknames are; the Grand Canyon state, the valentine state, and more.

The State Capital of Arizona is Phoenix City, which is located in the south-central of Arizona.

Arizona State is of no doubt one of the most beautiful states in the U.S as it is notable for its great majestic canyons and beautiful deserts.

The Arizona State Flag is usually called the Harris Flag. The flag of Arizona is divided into halves with a horizontal line, the first half at the top and the other half below.

The top half has 13 rays consisting of Red and Yellow colors, each of the rays represents the direction of the First 13 original colonies that made up the United States of America.

Below, on the other half has a blue field which represents the liberty blue of the United States Flag and one of Arizona’s official colors.

In the middle of both halves, there is a large star in a copper color which represents Arizona State as the central and the largest producer of Copper in the whole of the United States of America.

The Man who designed the Flag was Col Charles W. Harris and that was done in 1910. The original purpose was to design a flag for the Arizona Rifle Team for their National Matches.

Eventually, the Flag was adopted and passed into law by Arizona’s Third Legislature in 1917.

Arizona State is located in the Southern region of United States of America and particularly in the Southwestern part of it.

Arizona is bordered by the California to the west, Utah to the North, Nevada to the Northwest and New Mexico to the east.

Arizona is described as one of the fastest-growing states in the USA due to the uprising population of a city called Phoenix which is found in Arizona State.

The population of Arizona State as of 2019 has been calculated to be 7.2 million. The people of Arizona have diverse cultural lifestyles tracing it back to the early years and origin of the state.

The culture and traditions of people in Arizona are mixed due to the influences of the Mexicans that settled there.

The Spanish Conquistadores also has their own effects when they took over Arizona and give it a starting touch of becoming a city and that made it easy for the city to find its way through.

Today, the notable traditions of Arizona people are; the Lighting of Luminaries, Boat Parade of Lights, Desert Foothills Christmas Pageant, Arizona’s Christmas city, and many more.

The official language of Arizona is English but some other languages like Spanish and Navajo are also common.

Arizona State is home to a Giant Lizard called Gila lizard. Not only that, it is home to about 15 species of rattlesnakes and the most common of them is the Arizona ridge-nose rattlesnakes.

Arizona is also inhabited with other animals like raccoons, cacomistles, miner’s cats, coyote, and many more. Arizona has beautiful wildlife surviving in the deserts and the cactus wren is regarded as Arizona’s official state bird.

Related: Facts about Alaska state that will interest you

Did you know that the hottest city in the United State is found in Arizona State?

I have more interesting facts about Arizona. Kindly check below.

5 Most Popular Cities In Arizona

Arizona has about 91 incorporated cities and towns; it is also divided into 15 counties. The first 5 most popular cities would be detailed below.

Phoenix city is the most popular city in Arizona State having a population of about 1,703,080 people. Phoenix city is located in the Southwestern area of Arizona, U.S.A.

Phoenix city is nicknamed the valley of the sun because the weather is usually hot in Phoenix city and the sun shines more in the city.

Phoenix city is the state capital city of Arizona and it has a land area of 517.9 square miles.

Tucson city was the third city to become the capital city of Arizona before it was finally changed to Phoenix city.

Tucson is the second-most populous city in Arizona State with a population of about 553,871 people.

Mesa is listed as the third most popular city in Arizona, U.S.A. Mesa city is located in the East of Phoenix city taking just 20 miles away from it.

Related: Arkansas state in the USA – All you need to know

Chandler city is located in the Southeast of Phoenix city, Arizona State. It is the fourth most popular city in Arizona as it has a population of about 268,675 people.

Chandler city has a total area of about 169.2 km^2 and it belongs to the Maricopa County of Arizona.

The fifth most popular city goes to Scottsdale city as its population has been calculated to be about 262,222 after Chandler city.

Scottsdale city is located in the Eastern area of Maricopa County of Arizona and bordered by Phoenix city.

Scottsdale is one of the favorite hotspots for golf courses in Arizona State. The total area size of Scottsdale city has been measured to be about 184.44 square miles and it is ranked the 84th most populated city in the United States.

Related: Interesting facts you should know about Hawaii state

Arizona is well known for its involvement in Copper production and this sort of production has been its pride for hundreds of years as it is even one of the highest copper producers in the world.

A lot of people visit Arizona State each year to enjoy nature and see the beauty of its deserts. Some of the other exciting things to see are the waterfalls of Arizona and also the Irrigation Canal Systems of Arizona.

Arizona is classified as one of the most beautiful states in the United States and it would be a lovely place to visit and spend some time with family and friends.

What do you think of the interesting facts above? Kindly use the comment box below and let us hear you out on the part that excites you the most.