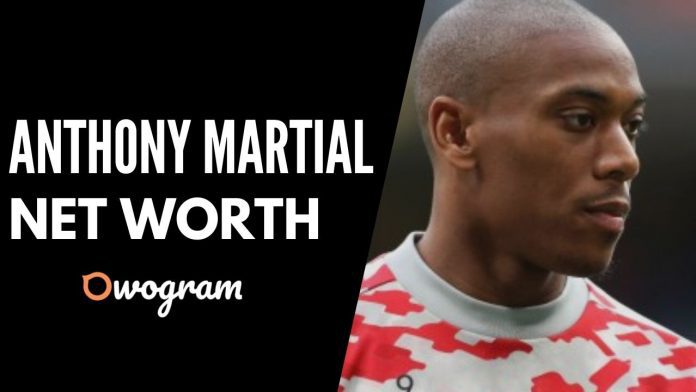 How much is Anthony Martial Net worth?

Anthony Martial is a French forward capable of playing as a left-wing forward. He plays for the France national team and Manchester United.

Known for his quick feet, pace, and goal-scoring prowess, Martial is always a joy to watch when he is in scintillating form, though several injuries have hampered him in recent times.

His successes made him one of the most sought-after forwards worldwide; given the lucrative nature of football today, discussions on Anthony Martial’s net worth have been held by football fans.

Having played as a forward for Manchester United for over six years, Anthony Martial has seen a tremendous rise over the years in his earnings.

Even though He is not among the top 20 richest footballers in the world right now, but with his potential and what he is capable of doing, maybe he can manage to enter the list in the future.

Playing for a top club in England and Europe, Anthony Martial net worth is expected by many to be mouthwatering.

Football fans are trying to find the answers to the big question: What is Anthony Martial’s salary? What is the current market value of Anthony Martial?

In this article, you will find the answers to the questions above, including Anthony Martial’s Biography, lifestyle, background, and many more.

Anthony Martial Net Worth & Transfer Worth

Anthony Martial Lifestyle & How He Spends His Money

Anthony Martial is one player that loves to keep his private life away from the public.

He maintains a low profile, but that doesn’t mean he doesn’t enjoy a measure of luxury and comfort with his family.

He also owns a car collection worth more than 2 million dollars.

Some of the cars in his car collection include Range Rover, Audi, Bentley, a d Mercedes Benz.

Anthony Martial was born in Massy, France, on the 5th of December, 1995. His parents, Jordan and Audrey Martial were immigrants from the Caribbean Islands of Guadalupe.

Growing up was challenging for the young forward. Still, as he already began nurturing a desire to become a footballer, his parents supported and encouraged him and his brother to take football seriously.

Being a talented young attacker with some eye-catching skills up his sleeve, Anthony Martial attracted several clubs in Europe, including Olympique Lyonnaise, who recruited him into their youth ranks in 2009.

Anthony Martial began playing for the U17 youth team of Lyon, and he did not take long before Martial showed the stuff he was made of, as he notched a total of 32 goals in just 21 matches at the youth level.

His fantastic talent saw him called up to the France U17, where he continued to impress.

In 2013, young martial was promoted to Lyon’s first time and was given his debut during the club’s match against Hapoel Ironi Kiryat Shmona in the UEFA Europa League.

Two months after making his UEFA Europa League appearance, Anthony Martial made his Ligue 1 debut. He was later sold to As Monaco in 2013, where he joined team B of the club before he was promoted to the first team.

The then coach of Manchester United, Louis Van Gaal, wasted no time in giving the prolific forward his debut in a match against Liverpool FC which he opened his goal account for the club, on his debut.

Since joining Manchester United in 2015, Anthony Martial has registered 56 goals in 174 appearances.

This in itself had prompted the club to reward him with several contract renewals with a pay rise, so it’s no surprise that Anthony Martial Net worth is a staggering one.

The report has it that he intends to move away from the club during the 2022 Transfer window in January.

Anthony Martial has represented the France national team at the international level 36 times and has scored two goals in total. Anthony Martial Net worth in the course of his career is 25 million pounds.

In one of Anthony Martial quotes, he once said; “I have many aspects of my game I need to improve, and that’s what I am focusing on. I prefer not to say what they are in public – for me, it’s a secret, and I just want to work hard.” – Anthony Martial.

He is from France.

Although, his future at Man Utd is yet undecided for he is not used as often as he should be but He is still a Man Utd Player.

And though we haven’t heard of anything from the player, one day, he might have to decide whether to continue at Manchester or to leave the club for good.