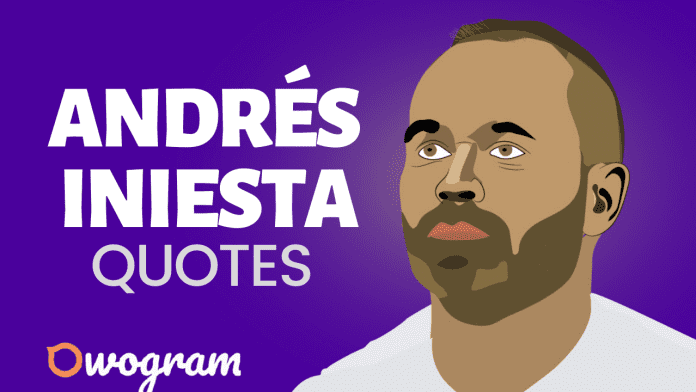 Andres Iniesta is a Spanish football player who has won numerous awards for himself and his club, FC Barcelona.

He is one of FC Barcelona’s most consistent and popular player which have won him lots of nominations and awards.

He has been nominated numerous sports honors and was named the UEFA Best Player in Europe in 2012 and the Best Player of the 2011–12 UEFA Champions League.

He was also awarded the Marca Legend Award in 2011. Since then, Andres Iniesta’s net worth started to grow. Today, he is one of the richest footballers in the world today.

You can learn more about Iniesta’s biography and worth, early life, career, achievements and highlights.

1. “There are moments when your mind is very vulnerable. You feel a lot of doubts”. – Andres Iniesta

2. “If you win without sacrifice, you enjoy it, but it’s more satisfying when you have struggled”. – Andres Iniesta

3. “I want to be remembered as a great footballer and a great player. When our football days are over, that’s all we are – people”. – Andres Iniesta

4. “There are moments when the human body can overcome things you would never expect”. – Andres Iniesta

Related: 45 Amazing quotes from Kyle Walker about soccer and life

5. “Small players learn to be intuitive, to anticipate, to protect the ball. A guy who weighs 90 kilos doesn’t move like one who weighs 60. In the playground, I always played against much bigger kids and I always wanted the ball. Without it, I feel lost”. – Andres Iniesta

Related: 30 quotes from Francesco Totti about life and Football

6. “I want to extend my career for as long as I can”. – Andres Iniesta

7. I will keep helping the team become successful”. – Andres Iniesta

8. “I get the feeling people respect me and that there is affection for me. That makes me happy”. – Andres Iniesta

10. “Some people like you, some people don’t. In the end, you just have to be yourself”. – Andres Iniesta

11. I’m not better or worse than anyone else in the world. I have my virtues and my flaws like everyone one else”. – Andres Iniesta

12. “My father has made a museum with my cuttings and photographs”. – Andres Iniesta

13. “La Masia is a place where a lot of people live together but you are on your own. – Andres Iniesta

14. “Every player wants to be as complete as possible and goals for a central midfielder are very important”. – Andres Iniesta

15. “Most things come from inside; they’re intuitive. That’s the way I am”. – Andres Iniesta

16. “We know that these types of games are unique and it doesn’t matter what form the other team is in. we’re preparing for a massive game against a very powerful team”. – Andres Iniesta

17. “What I do when speaking in public is trying to do it as best as possible and trying to make everybody comfortable with my words. Sometimes getting this is very difficult, but I try my best”. – Andres Iniesta

18. “I like to watch soccer, no matter what teams or players are in the field”. – Andres Iniesta quotes

19. “People see footballers as different beings as if we’re untouchable as if nothing ever happens to us, but we’re people. Of course we’re privileged, but in the tangibles, we’re the same”. – Andres Iniesta

20. “It’s not my target to be the best in the world, though. It’s better to be better as a person every year and to be happy playing”. – Andres Iniesta

Yes, in one of the quotes from Sergio Ramos, he said: “Bad things can happen even to the best players”. – Sergio Ramos

21. “When you need help, you have to look for it: at times, it’s necessary. People are specialists; that’s what they’re there for. You have to use them”. – Andres Iniesta

22. “In the past, I had my idols but today I enjoy learning from all the soccer I watch”. – Andres Iniesta

25. “There is no rule that says a footballer needs to be ‘this high’ and ‘this wide”. – Andres Iniesta

26. “A great deal of whom I am is down to Barca and La Masia – I am very thankful to them”. – Andres Iniesta

27. “You have different sorts of people in life, so why should it be any different in football”. – Andres Iniesta

29. “If there is one thing that all players have in common, it is that winning, competitive gene; the ability to overcome obstacles and fight for what you want from your career”. – Andres Iniesta

Yes, in one of the powerful quotes from Asamoah Gyan, he said; “Passion is a desire which is stronger than death” – Asamoah Gyan

30. “It’s true that time is against me, and I am closer to hanging up my boots, but one thing I have clear is that I will be involved in football. I don’t know how, but I will be related to football. It’s my life”. – Andres Iniesta

Thanks for checking out this collection of Andres Iniesta quotes! Don’t forget to like and share them on social media.