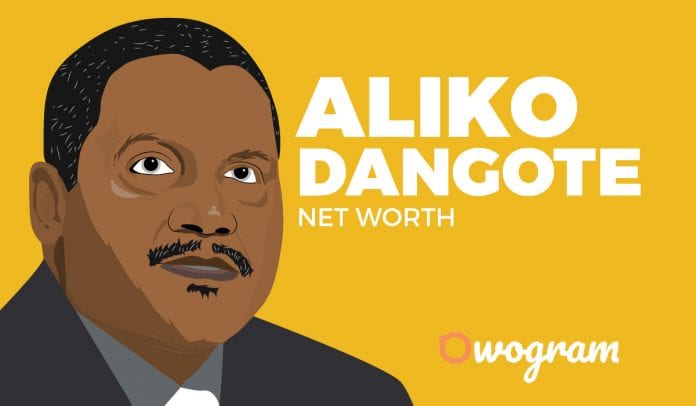 How much is Aliko Dangote net worth?

If there is one man who has consistently kept Nigeria on the map of Africa and brought relevance and recognition to the Nigeria, that man is none other that Aliko Dangote.

He’s an individual who has been at the forefront of industrialization in Nigeria, registering footprints in countries across the continent as well. No wonder he tops the list of the top 10 richest men in Nigeria.

The business acumen of this billionaire mogul is with great recognition, which leads to many discussions regarding Aliko Dangote net worth.

Discussions about Dangote is on a daily basis among Nigerians and Africans considering the massive impact which he has effected in different industrial sectors through his diversified business portfolio.

The mere fact that he’s the richest man in Africa for over 5 consecutive years and still going strong is enough to make him the talking point within the business space, as well as day-to-day discussions.

Through this article, we will enlighten you on Dangote’s worth, age, his early life, how he made much of his wealth to become such an inspiration to many aspiring young people throughout the continent Africa.

Today, it is estimated that Aliko Dangote is worth an estimated 12 Billion USD. Here are some of his achievements below:

No doubt, Dangote’s riches and achievements is the reason many of the top 10 richest musicians in Nigeria will always aspire to be like him.

Aliko Dangote was born on the 10th of April 1957 into the wealthy family of Mohammed Dangote and Mariya Sanusi Dantata who were his father and mother respectively.

Contrary to the initial thoughts of the majority of people that Dangote came from a humble background, the reverse is the case.

His great grandfather, Alhaji Alhassan Dantata was widely known as the wealthiest in the West African region until his final moments in 1955. With his lineage, who could ever predict what Aliko Dangote net worth will be today?

Aliko Dangote was born and raised in Kano State in the Muslim way of his ancestors. For someone born with silver spoon, it’s expected that he had everything he wanted at the snap of his fingers.

Dangote first tasted western education which many were not opportune to have in Northern Nigeria at the Sheikh Ali Kumasi Madrasa.

After concluding his primary education there, he proceeded to the Capital High School, Kano.

Dangote was not just blessed with being born into such a rich family, but also inherited the industrial spirit of his grandfather which were made manifest while he was still a kid.

According to him, he has always been interested in trying his hands-on business from his childhood, even trying to resell goodies and snacks he bought with his money to friends at school.

This, we believe, was the foundation of his entrepreneurial venture from such a young age and blossomed into a real business tycoon many people talk of today.

Dangote graduated from Government college in Birnin Kudu at the conclusion of his secondary education and proceeded to study business studies and administration at the Al-Azhar University, Cairo.

Subsequent to the completion of his studies in college in 1977, Dangote made a bold move to startup his own business.

To do that, he needed sufficient funds to run the business but he couldn’t gather enough at the time. This led him to meeting his Uncle, who was also a rich business man at the time to lend him funds, which he agreed to.

The exact amount he was borrowed is quite unclear, as some sources claim it was up to $3,000 while others claim it is way less. Whatever the amount was, it was enough to help him venture into the business he had in mind. You’ll agree with me that Aliko Dangote net worth hadn’t started to rise, back then.

After Dangote secured the loan amount, he immediately moved to business by importing soft commodities at wholesale prices from international suppliers.

The major commodities his imports were based on include Rice from Thailand and Sugar from Brazil. These goods were then sold at retail prices to buyers from his locality.

This business earned more success than Dangote ever imagined, as he got exponential profits that would allow him expand his business in no time.

According to him, he could make profits up to $10,000 on a good business day. In no time, Dangote was able to raise enough money to repay his uncle and focus on his business full time. This marked the beginning of the rise of Dangote Net Worth.

As time went by, Dangote had the idea that the cost of being a middle man had a lot of financial strain on his business, as he earned less than he would normally have.

This led him to invest and set up a plant to produce and sell all the commodities like salt, flour, sugar, and pasta which he’s been importing from countries overseas for more than 2 decades. This was also a bold move that would positively affect Dangote Net Worth.

Within that time frame, more luck shined on Dangote as he was awarded a public cement company by the Government of Kano state.

After operating the cement company for years, Dangote decided to improve the output of the company as well as profits by embarking on a project to expand the company, as well as build a manufacturing plant in 2005.

This project was partly funded by his personal funds reaching up to $319 million, as well as a $479 million loan from the International finance corporation.

At the conclusion of this project, Dangote separated the company into separate manufacturing divisions which includes: Dangote Sugar Refinery PLC., National Salt Company of Nigeria PLC., Dangote Flour Mills PLC., and Dangote Cements Plc. Dangote Net Worth at this point skyrocketed to reach a billionaire status.

Despite earning massive profits from his latest venture, Dangote would always reinvest all of his profit, rather than keep them lying idle in the bank.

This meant that his money is working for him, even while he’s sleeping. This concept is referred to as passive income by economists.

Despite being so different in his business model and ways, Dangote has always had an interest in the oil and gas sector.

This led to his recent investment in this sector, as he recently embarked on constructing an oil refinery which has been such a big headache for the Nigerian government for over 5 decades.

Upon the completion of this project, it is expected that the costs of producing and getting finished petroleum products from countries overseas would be cut down and eventually eliminated.

This refinery is projected to produce a whopping 650,000 barrels of oil per day after completion. Clearly, Dangote Net Worth after the completion of this project would be unimaginable, and only time will tell.

Dangote Net Worth was not a figure achieved in a day, it was all a process which took years and years to accumulate and consolidate to become what it is today.

This is why for ten consecutive years, he has remained the richest man in Africa as he keeps on evolving his business to adapt to the technical and financial changes, both in Nigeria and beyond.

As many reading this article may already know, Dangote’s business is vast, as it is spread across different industries most of which he is the leading force.

His business group known as the Dangote group has many sub groups which all consolidate and provide revenue for the conglomerate.

Dangote Cement is the biggest among the business portfolio within the group, taking up a whopping 85% of finances, revenues and production.

Figures released by official sources claim that the Dangote Cement subsidiary provides up to 45.6 million metric tonnes of cement annually, serving more than 10 countries across the continent.

Dangote sugar is another subsidiary which owns the third largest refinery in the whole world. That is such an amazing feat to achieve for the group.

Through his numerous companies and subsidiaries which are publicly traded, Dangote owns up to a quarter of the total market cap of the Nigerian Stock Exchange. To make it clearer, Aliko Dangote Net Worth is valued at a quarter of all of Nigeria’s reserve.

Today, Dangote Net Worth is estimated to be worth $12 Billion dollars.

How Dangote Spends His Money

When Dangote is not investing his money in his business, which he does most of the time, he is expressing his high taste in luxury.

For someone with the riches of Dangote, anything can be bought, from cars, to mansions, to expensive yachts; all of which are luxurious.

As expected, properties which Dangote own are of expensive taste, with much detail focused on luxury.

This fleet of cars are supplemented with a luxury mansion in Abuja worth $30 million and a private Jet which he acquired for a mouthwatering $45 million.

How much is Dangote Worth In Naira?

In one of our favorite Aliko Dangote quotes, he once said; “The most dangerous thing for an entrepreneur to do is to actually go into a business that he does not understand fully.” – Dangote.

Some of the life lessons anyone can take from this business guru is that;

Summary of Aliko Dangote Net Worth

The journey of the life of Dangote shows how deserving he is of the net worth which he commands today.

For Dangote to be recognized as the richest man in Africa for the tenth consecutive years attest to the fact that he is a well established business mogul whose legacy will live for several centuries after him.

This article has brought you closer to the life of Dangote, how he accumulated his wealth, and other interesting facts about his business successes that made him a revered individual that he is today.

What did you think of Dangote’s net worth and how he achieve the billionaire status? Let’s have your comments in the box provided below.