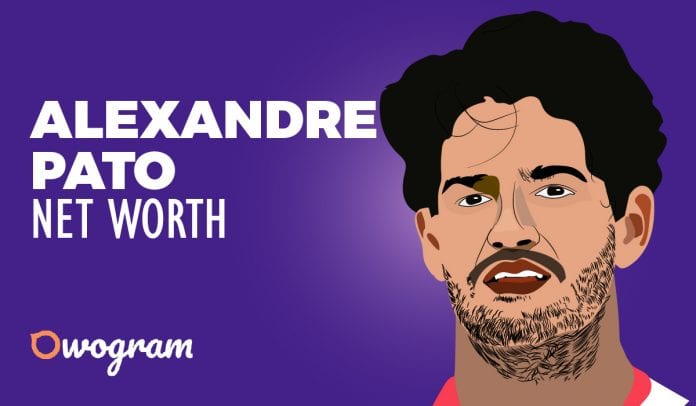 How much is Alexandre Pato net worth?

Referred to as one of the brightest talents in the history of Brazilian football, Pato has failed to live up to expectations his career was tagged with at the early stages of his career.

As one of the popular soccer players, Alexander Pato net worth is something to consider when talking about the richest footballers in the world.

His career probably failed to reach predicted heights mostly due to frequent injuries that plagued him.

He played for a plethora of clubs like AC Milan, Chelsea, Sau Paulo, Tianjin Quanjian before finally settling in Corinthians.

In this article, we’ll discuss Alexandre Pato net worth and how he came to get everything he has despite his disappointing career. But first, we’ll give you a brief overview of his early life, career and everything else.

Alexandre Rodrigues da Silva commonly referred to as Pato was born on 2nd of September 1989), is a Brazilian professional footballer who plays as a right-winger and Striker for São Paulo.

He once said in an interview that at a young age, he broke his arm and he saw tumor coming out of the arm.

He then thought the arm was going to be amputated until he had surgery that successfully removed the tumors and his arm was just fine.

Pato announced himself on the world stage after he was included in the Internacional squad to play in the 2006 FIFA Club World cup which they subsequently won.

During the competition, Pato broke Pele’s record as the youngest player to score in the Club World Cup against AL Ahly.

He then continued to turned heads at Internacional when he helped the club win their first ever Recopa Sudamericana title.

He also helped the team to win their third international title after scoring against Pachuca in the final with a great performance.

By the start of the season, a lot of teams were already scrambling for his signature but he was finally signed by AC Milan on the 2nd of August, 2007 for a fee of €24 million, and he was paid a salary that boosted Alexander Pato net worth by the thousands.

He then made his debut in the AC Milan shirt in a friendly against Dynamo Kiev where he scored a header.

He scored his first competitive goal in the Milan shirt against Napoli which ended 5-2 at full time. By the end of the season, he scored 9 goals in 20 appearances for Milan.

The following season, Pato sent the league into a frenzy with his creativity, goalscoring and speed which made him one of Milan’s most important players.

He also went on a scoring streak in late January 2009 where he scored 6 goals in 4 appearances including the winning goal against Fiorentina on the 18th of January.

He subsequently ended the 2008-09 season as Milan’s top scorer with 18 goals.

In the first league match of the 2009-10 season, Pato scored both goals to seal a 2-1 win against Siena.

He later scored twice in a champions league match against Real Madrid at the Santiago Bernabeu, where Milan won 3-2.

Throughout the match, Pato played from the right-wing in a 4-3-3 formation deployed by Carlo Ancelotti.

Later in January, Pato won the 2009 Serie A young player of the year award during the Oscar del Calcio events. He became the first Brazilian to win it. No doubt, this added to Alexandre Pato net worth.

On his return to the pitch, he scored a goal in three consecutive Milan games against Bari, Udinese and Fiorentina.

He then scored a brace against Atlanta in a 3-1 win but he was substituted before the end of the match due to a hamstring injury. He aggravated the injury again after returning from the previous one and from there, his season was over. He was only able to play only 20 matches that season due to recurring injuries.

Pato then hoped for a better season than the last as he started the first league game of the season against Lecce.

He scored two goals in the 4-0 win but injury struck again in his second match and he has ruled out again for the next three games.

On his return from injury, he scored two goals against Chievo playing as a striker.

His performance improved over the year with goals to show for it but then his injury worries never left him as he was ruled out for another 6 weeks.

On his return, he scored a plethora of goals against Udinese, Sampdoria, Genoa, and Chievo including braces.

Most of the goals he scored were important ones like winning goals or goals to save a point for the team.

In a derby match against Internazionale where the fellow striker was suspended, Pato manned up and scored both goals to help Milan win the game at 2-1.

Pato then achieved another feat in the Champions league when he scored a goal within 24 seconds against Barcelona making it the fifth fastest goal in the history of the tournament.

He suffered an injury in a league match against Udinese and returned also in the league against Fiorentina.

He went on a string of excellent performances by scoring and winning penalties in matches against Chievo, Victoria Plzen in the Champions League, and Bologna.

In the winter of 2012, PSG tabled a bid for Pato which Milan were ready to accept but Pato rejected the deal citing his happiness and dedication to the club.

Pato however missed the remainder of the season due to injury in a game against Novara in the Copa Italia.

He then signed a contract extension with the club which was not much of a boost to Alexander Pato net worth.

Due to the retirement of Filippo Inzaghi, Pato took the number 9 shirt before the start of the 2011-12 season.

He picked up another injury in the third training session of the season and he missed out the next 6 weeks.

He returned to the team in a league game against Lazio and Milan lost.

He scored the first goal of the new season against Malaga. His last game for Milan was against Anderlecht in the champions league.

He scores his first goal on his debut against Oeste with an assist from Paulinho. He scored his next goal against Millonaros in the Copa Libertadores by volleying a cross in.

Pato then went through a wave of criticism from both his club’s fans and its director when he missed a plethora of goalscoring chances against a few teams.

After going ten games without a goal, on the 7th of July, Pato scored twice against Bahia. He then missed a penalty in a shootout loss against Gremio and Corinthians were subsequently knocked out of the Copa do Brasil.

Pato was then transferred to Sau Paulo in an exchange for Jadson to move in the opposite direction. With no offer coming from another club, Pato returned to Corinthians at the end of his loan.

And on 2nd of April, he made his debut against Aston Villa where he scored a penalty to seal a 4-0 win for Chelsea.

By the end of the season, Pato had only 2 appearances and Chelsea decided against making the move permanent. He then returned to Corinthians.

On the 26th of July, Villarreal signed Pato for €3 million with a 60% fee on any future transfer to be paid to Corinthians.

He still scored on his debut for the club against Monaco in a champions league playoff which ended in a 2-1 defeat.

In the opening game of the Europa league, he scored and assisted a goal in a 2-1 win against Zurich.

He was later transferred to Tianjin Quanjian in January for a fee of €15 million. He had a terrible time at the Chinese side altogether as he was moved on to Sau Paulo on a 3 years contract.

Related: What is Olivier Giroud net worth today?

Alexandre Pato Net Worth and Highlights

As of today, Alexandre Pato net worth is estimated at $145 million dollars. Here are some of his best highlights:

In one of Alexandre Pato quotes, he said; “Talent is a feeling that you want to play.“

Summary of Alexandre Pato Net Worth

Alexander Pato net worth is mostly obtained through the salaries he was paid in all the clubs he played for.

It was later in his career that he ventured into his own personal business. He also had valuable endorsements that boosted Alexander Pato net worth.

All these have been outlined in this post to show how he was able to accrue this net worth.

This article has been about Alexander Pato’s net worth and biography, and we hope it has enlightened and been helpful to you.