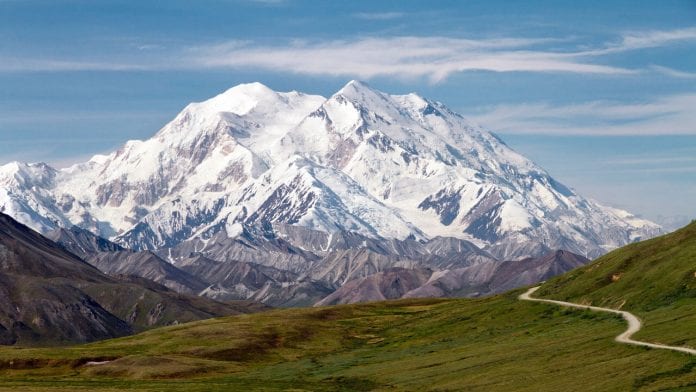 Alaska State was the 49th state to join the union of the United States of America on the 3rd of January, 1959 under the leadership of President Eisen Hower.

Alaska is located in the Northwest part of the U.S particularly across the Bering Strait from part of Asia.

Alaska is ranked the largest state by area in the whole of the USA, with a total land area of 663,268 square miles.

Alaska State is popularly called the “Last Frontier”. This state was dominated by the Russians long ago and was eventually sold to the U.S in order for it to be a legitimate part of the U.S. The word Alaska is from the Alcut word which means a Great Land.

Alaska is second on the list of all US states in alphabetical order and it’s the current capital city is Juneau and it is located in the Alaskan Panhandle and the Gastineau Channel.

Gold is the main mineral of Alaska and it is the second-highest gold mining state in the USA.

The flag was designed by a 13-year-old boy called Benny Benson who was a 7th grader from an Orphanage home in Seward, Alaska.

There was a time that arouses the need for a flag in Alaska and competition was conducted in Alaska by the American Legion in 1926. In 1927, the design of benny Benson was selected and approved as the official state flag.

The flag consists of a blue background which represents the sky of Alaska and the Forget-me-not flower of Alaska. It has 8 gold stars which one is bigger and the other 7 stars form a shape of a big dipper.

The big dipper represents the Great Bear or the Ursa Major Constellation.

Alaska State is seen at the North West of North America’s West Coast across the Bering Strait from a part of Asia.

Alaska is bordered by the Arctic Ocean and the Beaufort Sea to the North, Pacific Ocean and Gulf of Alaska to the South, the Bearing Sea and the Bering Strait to the West, the British Columbia province and Canada’s Yukon Territory to the East.

Alaska has a population of about 710,249 residents and that is enough to show the continuous lifestyles of the people of Alaska.

Although Alaska is the largest state by area in the USA, it didn’t do so well with its population ranking as it is the 48th most populous state in the United States.

The first set of people to settle in Alaska were the Tlingit and Haida people. Later, the Danish explorer Vitus Bering found Alaska in 1741.

Not long after, the Russian, Spanish, English and French began to live together in Alaska due to the exploration. As a result of this, Christianity religion found its way into Alaska as it was firstly introduced by the Russian- American Company.

The people of Alaska state speak about 20 languages and English is the most common language.

Alaska has more than 3,000 rivers and 3,000,000 lakes. Is that fact enough or you want to know more? Check out 5 other interesting facts about Alaska.

5 Most Popular Cities In Alaska

Alaska State has about 149 incorporated cities which about 116 of are regarded as second-class cities. Only the top 5 popular cities will be pointed out briefly.

Anchorage is the most populous city in Alaska with a population of about 285,634 people. Anchorage is located on the west coast of the USA.

Anchorage is officially called the municipality of Anchorage and it has two popular nicknames which are; the city of lights and flowers and Los Anchorage.

The second most populous city in Alaska State is Juneau and it is regarded as the state capital city of Alaska.

Juneau is located in the Gastineau Channel and the Alaskan Panhandle.

Juneau has a total population of 31,435 people and that makes it the second-most populous city in Alaska.

Fairbanks is a city in Alaska which is located in the East-central of Alaska, USA.

Fairbanks city is the 3rd most populous city in Alaska as it has a total population of about 30,996 people.

Related: Massachusetts State profile – All you need to know

Badger is a city in Alaska which is popularly called the Badger of Alaska. It is located in the Fairbanks North Star Borough of Alaska.

Badger has a total land area of about 66.71 square miles. Badger city also has a population of 18,782 people and that makes it the fourth most populous city in Alaska.

Knik-Fairview is the 5th most populous city in Alaska State and it has a population of about 17,513 people.

Related: Interesting facts about Edo state – All you need to know

For a place like Alaska, Gold is the main production of this state. Alaska is even the second-highest gold mining state in the USA and that shows how rich Alaska is.

Alaska is one of the oldest cities in the entire USA. The city with the highest population in Alaska has about 285,000 people which shows how low the population of Alaska is due to the constant freezing temperature in most parts of Alaska State.

Did you enjoy the interesting facts above? If you don’t mind, kindly tell us about the ones you enjoyed the most in the comment box below.