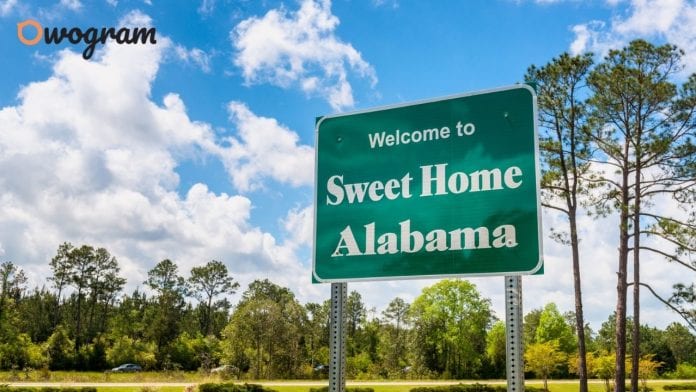 The United States of America is made up of 50 states and Alabama State is one of them.

Alabama State is located in the Southern region of United States and it is popularly known for its iron and steel natural resources.

This state has three nicknames which are; the Heart of Dixie, the Cotton state and the Yellow Hammer state.

Alabama in U.S.A got its name after a river called Alabama River but the Alabama River was named by an Indian tribe that settled around there many years back.

The capital of Alabama State is Montgomery, which was regarded as the first confederacy capital in the United States and well known for the foundations of many Civil Rights Movements.

Alabama is a beautiful state and it involves actively in forestry, ICT, production of chemicals, iron and automobiles.

Alabama’s flag is similar in shape with that of St. Andrew’s cross which is also used in Scotland as it was believed that St. Andrew was crucified in such form.

The difference between the flag of Alabama and the flag of Scotland is just the color variant.

The official flag of Alabama was designed in 1895 and it consists of two colors which are White and Red.

It is worthy to know that the flag of Alabama was adopted by Act 383 of the Alabama State Legislature.

Alabama is located in the Southern area of the United States, particularly, the Southeastern part of it.

Alabama takes the 30th number in the list of the largest states in the United States. It has a land area of 135,767 km^2 and that amounts to about 52,420 square miles.

Related: The state of Hawaii in the USA – All you need to know

As of 2019, it was recorded that Alabama has a population of 4.9 million. Out of these people exists cultural lifestyles and traditions. One of the most notable cultures and traditions of Alabamans is Music.

The official language of Alabama is English and the majority of the people are Christians, although there are Muslims, Buddhists, Jews, and some other religious groups in Alabama.

Some of the popular cultural institutions in Alabama are found in Montgomery, Huntsville, Mobile and Birmingham.

Alabama is home to a lot of habitats starting from insects to large mammals and aquatic animals.

There are about 62 native mammals in Alabama State. One of the most popular birds in Alabama is the “Yellow Hammer”.

Some of the other random animals found in Alabama are; the mountain lion (usually referred to as the cougar), foxes, bats, raccoons, horses, and some reptilian families like snakes.

Snakes are common in Alabama, particularly the specie of rattle snakes which are quite dangerous in nature.

Alabama is blessed with a lot of natural habitats and they all contribute to the beauty of nature and Alabama’s beauty in general.

Did you know that Alabama was the First state in U.S.A to declare Christmas as a legal holiday?

5 Most Popular Cities In Alabama

There are 169 cities and 291 towns in Alabama but out of these cities, I would like to tell you about the 5 most popular cities in Alabama State.

The nickname of Birmingham City is known as the “Magic City” because it was said that Birmingham as a city grew like magic. There is low cost of living in this city and the rate of unemployment is also low, therefore making it a good place to reside.

Montgomery is the capital of Alabama State and it is often regarded as the primary home for Civil Right Movements.

Montgomery City is the second most popular city in Alabama and has a population of about 200,602.

This city is known as the capital of dreams and also for its richness in Arts and Poetry. Montgomery was the first capital of the confederacy of the states in U.S. Here are 20 Interesting facts about Montgomery.

Mobile is the Oldest City in Alabama State and it was founded in 1702 by the French people. Today, Mobile has a population of about 194,288 people.

Mobile was the first city Mardi gras was celebrated in Alabama. It is also regarded as the major port city on Alabama’s Golf Coast.

Huntsville is located in the Northern region of Alabama. Huntsville was named after a man called John Hunts. Huntsville is popularly known as a home to George C. Marshall Space Flight Center.

The Population of Huntsville has been estimated to be around 190,582 and it is the fourth most popular city in Alabama.

Tuscaloosa city is located in the Western region of Alabama, particularly along the banks of the Black Warrior River in the West-central of Alabama.

Tuscaloosa City is the 5th most popular city in Alabama and has a population of about 99,543 people.

Check out: The list of government grants for individuals in the USA.

Alabama is rich in natural resources as it is the only state that has the resources to make Iron and Steel in the United States.

Alabama is a nice place to make live and settle in since majority of the people in Alabama are friendly. This state is also known for the production of cotton and the cost of living is low compared to some other states.

That’s almost all you can know about Alabama state for now, if you have anything to say concerning this post, kindly use the comment box below and your words would be surely welcome.